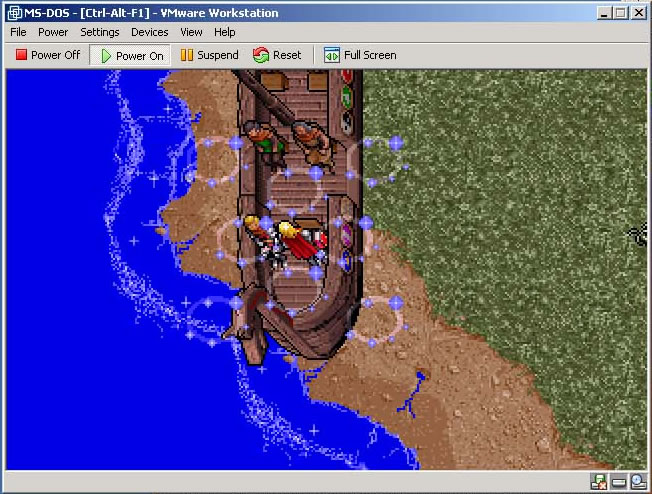 The program is called VMware Workstation and can be found at http://www.vmware.com.

This program allows you to run virtual machines inside of other operating systems. The end result is that you can do things like run a real install of Windows XP or Linux, in a window, in Windows 2000. However, for purposes of Ultima 7 the cool thing is that you can run a real, actual, true-to-life installation of MS-DOS in a window in Windows 2000 (or XP, I assume, though I don't have that to try).

It's extremely simple to setup and use. All I had to do was:

Once you do the first 9 steps, playing is as simple as just hitting the "Power On" button on VMware to boot the virtual machine and type "cd \SERPENT" and "SERPENT" to play the game.

Note that I'm running on a Pentium 2 450 with 384MB of RAM and a GeForce 2. The game is just a bit slow for me. It may be too fast for people with 1 ghz + processors and too slow for people with slower processors than mine. There may also be some way to adjust the virtual machines speed down that haven't found yet.

One last thing, I was not able to get sound or music to work, which is a shame. Someone with a real, original SoundBlaster card might be able to get it working, but my SB Live! is not compatible with older SoundBlasters.

Still, it's nice to be able to browse the web and play Ultima 7 at the same time.

VMWare is currently in beta for 3.0, but so far I've had absolutely no trouble with it.

I've attached a screen shot of Serpent Isle running in a window on my desktop. Note that when I took this screen shot Ultima 7 was actually running in the window (it was not frozen like a graphical DOS app running under Windows 2000 would normally be).

Nelno the Amoeba has kindly allowed anyone who needs assistance to contact him at his email (remember to remove nospam).